The more information you have, the better choices you can make for yourself, your family, and the planet.

Green dental patients often have questions about materials and dental procedures that other patients may not consider.

Here are answers to your commonly asked questions:

What is an EDA-Certified Office?

EDA-Certified offices are Eco-Dentistry Association® members who have taken extra steps to re-think every aspect of their business and procedures to ensure they are a part of the solution, and a leader in the transformation of the industry.

They have met the highest standards of eco-friendly practices in three key areas of their dental practice:

An EDA-Certified logo on your dentists’ web site, letterhead or door means your dental office is taking a leadership role! Be sure to commend them on reaching dentistry’s highest green standards!

What are the benefits of digital x-rays? How often should my doctor take images?

Digital images are an important part of early detection. Diagnosing tooth decay, periodontal disease, or structural issues early means treatment can be less invasive and less costly. Frequency of digital imaging can vary, but “bitewing” images every six months and “full mouth x-rays” at a first exam and then every 5 years is a good standard of care.

They also expose the patient to higher levels of radiation. We are exposed to natural levels of radiation every day, but in the US, the average American’s annual dose of radiation has grown six-fold, as we use it to try to detect disease at its earliest stages. High doses of radiation can be toxic and are linked to cancer. With good reason, many patients are questioning the over-usage of medical x-rays, including dental x-rays. 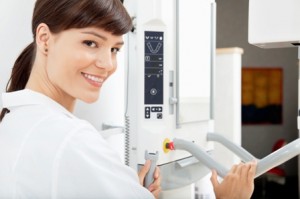 In some cases, your dental professional will recommend a CBCT scan, which produces a three-dimensional image of the skull. These should be taken infrequently and only when diagnostically necessary. In many cases, a panoramic digital image is sufficient. CBCT scans may be used by an oral and maxillofacial surgery practice when other forms of imaging have been screened and a more complex level of diagnostics is involved.

In the case of implants, wisdom teeth removal, trauma, orthognathic surgery, a CBCT scan is often recommended and appropriate, and may improve the treatment outcome. Some CBCT scanning equipment will allow the dental professional to choose settings that lower radiation levels, and employ a pulse technology that produces less radiation than a continuous beam. The professional is also able to limit the area of radiation exposure to the specific area of interest.

When having any dental images taken, your provider should use a drape that blocks any radiation from your torso and neck. Many of these drapes contain lead, but new, equally effective models lead-free.

Chlorhexadine is an antiseptic that is sometimes placed in the water the dental professional uses during teeth cleanings.

It helps to kill bacteria and bring the oral flora back into balance. It does have a somewhat “chemical” taste, and you can request your dental practitioner refrain from adding it during your teeth cleanings if you prefer.

Unfortunately, there are currently no natural alternatives available.

What ingredients should I avoid in home care tooth products?

Sodium Lauryl Sulfate, also known as SLS, is a foaming agent that is used in many types of toothpaste. While that bubbly feeling might make you think it’s good for your mouth, a 1983 study by the American College of Toxicology concluded that SLS actually irritates sensitive oral tissues. In some people, SLS aggravates or even causes canker sores, and irritation can occur with exposure to as little as 0.5% concentration. Once consumed, it lingers in the heart, liver and brain. It’s also toxic to aquatic life exposed to it once we rinse it down the drain.

Sodium Chlorite– A dose of 10-15 grams of this material can be lethal, and the material is known to be toxic to the kidneys. It’s used as a bleaching agent in the manufacture of paper, and is also found in some mouthwashes and toothpastes as a cleansing agent.

Fluoride– Fluoride is placed in toothpaste to reduce sensitivity, as well as reduce susceptibility to decay and cavities in children, or those who have diminished saliva flow. Some patients have concern about fluoride as an ingredient. Check with your dental professional to determine if a fluoride-containing toothpaste is indicated. Community water fluoridation is controversial and the scientific data is inconclusive, but fluoride that is used topically in toothpastes, mouthrinses and varnishes are generally considered as safe and effective for cavity prevention.

Sodium Hydroxide– A powerful cleansing agent used in manufacturing processes. It’s also known as lye or caustic soda. It is a strong chemical agent that can cause pain to throat, lips and tongue and can cause abdominal pain, diarrhea and vomiting.

Trisodium Phosphate– Also known as TSP, you may be familiar with this cleansing solution used to clean your driveway. It has been removed from most household cleansers and detergents due to the damage it causes to our water systems by promoting the overgrowth of algae, but it remains an ingredient in some oral care products.

Alcohol– You might not realize it, but mouthwashes can contain up to five times the alcohol of beer. Some mouthwashes have alcohol contents exceeding 25%, which in addition to being dangerous for households with children, have other negative effects. Alcohol-containing mouthwashes dry the inside of the mouth, and a dry mouth can lead to bad breath, the very thing people use mouthwash to avoid.

Titanium Dioxide– Titanium dioxide is a chemical used to make paint white. It is also used in some toothpastes. While the FDA considers it safe for this purpose, other countries, like Canada believe it should be avoided as a potential carcinogen, particularly when inhaled. Use of this ingredient in toothpaste is cosmetic only, meaning that it simply makes the toothpaste look white. Given the sensitivity of our oral tissues, consider whether to avoid toothpastes containing this ingredient.

No matter how diligent you are at taking care of your teeth at home, harmful bacteria grow in your mouth that can only be removed by a dental professional.

These bacteria can cause gum disease, and significantly affect your overall health.

The bacteria that cause gum disease are the same as those linked to heart disease and other illnesses, and nearly 90% of adults have some form of gum disease. Read more about the oral systemic link.

Your hygienist and dentist work together as co-therapists to help you manage your oral health. Depending on the health of your periodontal tissue, stress levels, family and personal health history, and incidence of gingivitis or periodontal disease, your dental professionals will chose the appropriate frequency for professional cleanings, and make recommendations for a home care routine.

Which dental products may contain BPAs? Are they safe?

Bisphenol’s are chemical compounds used to manufacture plastics and are present in most composite and flowable resin materials used to protect or restore tooth structure.

BPA’s are known to be estrogenic, and therefore travel easily through the cell membrane, where they can bind to and stimulate estrogen receptors. While estrogen is naturally present in our systems, estrogen imbalance is linked to health risks, including cancer. Most breast cancers “feed” on estrogen supplies for growth.

Night guards and other plastic sports guards may contain BPAs, but there are niteguards on the market that do not. For example, night guards made of Eastman Tritan copolyester are BPA-free, and there are numerous dental labs that can fabricate BPA-free dental appliances. The Eastman Tritan material is the same innovative material used in Camel Back products and Nalgene water bottles. Invisalign retainers do not contain Bisphenol-A. If you need a plastic dental appliance, ask your dentist whether the material used to fabricate it contains BPAs.

Exposure to BPAs from composite filling materials is only of concern when the resin is in a liquid or semi-liquid state – e.g. before it is hardened through the light curing process. Once it is hardened, there is no longer a risk of exposure. For this reason, the technique your dental professional uses in curing the material is very important. You will want to ensure they are using what is called the “layering” or “sandwiching” technique, in which the material is placed in layers and fully cured before the next layer is placed. This ensures the restoration is completely cured throughout.

You may also ask your dental professional to use a BPA-free composite resin, which can be found in the EDA’s GreenDOC™ Product Guide.

What are “silver” amalgam fillings? Are they safe?

“Silver” amalgam fillings are composed of 50% elemental mercury and 50% other metals, like tin, silver and copper.

The material is inexpensive and easy for dental professionals to work with. There is no more controversial subject in dentistry than dental amalgam. About 50% of dentists still use the material and believe it is safe and about 50% of dentists self-identify as mercury-free. Many believe that amalgam fillings can release mercury vapor over time, even after they are cured. Others believe there is no risk of mercury exposure because the mercury is chemically “fixed” in the amalgam.

Due to the high toxicity of elemental mercury, data regarding adverse effects on pregnant women and children, and the unappealing aesthetics of “silver” fillings, many patients do not want the material used in their mouths. I

Even if your dental professional does not place mercury-containing filling materials, you will want to ensure they have an amalgam separator, which captures the material before it enters our water supplies.

The EDA’s community of dental professionals and industry leading companies are well-informed, connected and positioned for success in dentistry’s green future. Read more about the EDA.